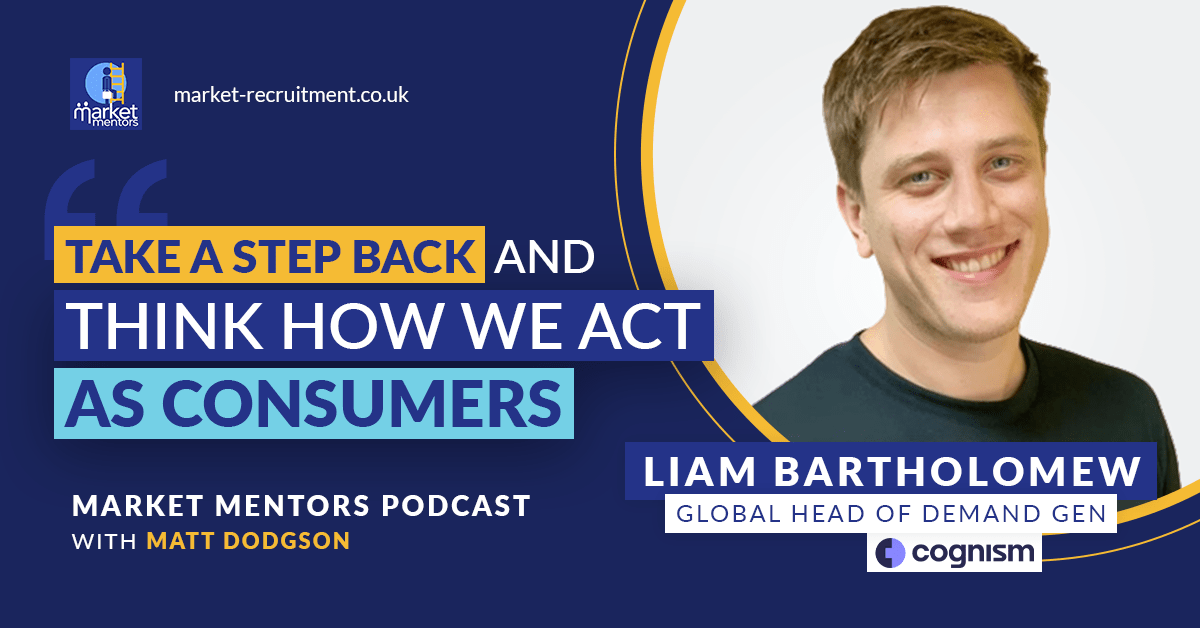 For a long time, lead generation was seen as one of the foundations of any B2B marketing strategy. But several recent trends have seen the power change hands from the supplier to the customer.

This has forced us marketers to place more emphasis on providing genuine value to our target audiences, building more meaningful, long-term relationships rather than trying to force less relevant prospects down the sales funnel.

As a result, many modern marketing strategies are prioritising demand generation over lead generation, taking a far more customer-centric approach, and achieving great success. An example of this is Cognism, a company that has recently increased its inbound pipeline four times over by embracing demand generation.

In this episode, Liam Bartholomew tells us the story of how Cognism has quadrupled its inbound pipeline by shifting from lead gen to demand gen.

Who they are: Liam Bartholomew, Global Head of Demand Generation at Cognism.

A bit of background: Liam has almost 10 years of experience in marketing, having started his career at Thomson Reuters. He’s been at Cognism for almost three years now, a company that provides a leading sales and marketing intelligence platform.

Where you can find him:

Prefer Video? Watch a full video of the podcast here…

Here you’ll find some of the best advice from the podcast that you can easily digest and learn from.

1. Why did you and your team initially consider shifting from lead gen to demand gen?

The marketing department at Cognism has come a long way since Liam joined. They’ve grown from three to 10, and have invested heavily in building out their capabilities to include things like in-house video production.

Cognism is an interesting demand gen case study to look at, because Liam and his team are marketing their SaaS product to other marketers. That requires them to stay ahead of the game, and cut out any activities which aren’t carefully targeted and highly relevant.

Having tried to persevere with lead gen for several years, though, it soon became apparent that there were more efficient and effective ways of acquiring new customers.

Liam said, “It got to the point where we were generating thousands of leads from content downloads. We just got really good at it. But we could see when we split out the funnel, the leads we were generating from content weren’t converting down into revenue. As a marketing team, though, we were targeted on revenue. That’s what management wanted from us. So, we asked ourselves, how could we make that number bigger?”

“When we split out the direct inbound leads – people who come in and request a demo – and the content leads –  people who download a piece of content – we saw those people weren’t going on to close. It wasn’t delivering any value to us.”

“We were generating so many leads, in fact, that if we had continued this model, we’d need to hire another marketing development rep. So, the system was really inefficient. Our close rate from these leads was only around 0.2%, compared to around 20% close rate from direct inbound enquiries.”

Clearly, it didn’t make sense for the team Cognism to continue working in that system. That would’ve been even more apparent if they’d had to hire another marketing resource, as the customer acquisition costs would’ve increased greatly as well. This is where a shift to a more demand generation-focused strategy was introduced.

This story is a great demonstration of a key challenge with any lead gen strategy, as so many people who come in as traditional ‘leads’ have no intent to buy from you whatsoever. From the point they submit their details to download your piece of content, the next stage of interaction with them is more of an outbound approach.

A change to demand gen helps to keep your target audience coming to you in an inbound context, and drastically increases the relevance of the prospects your sales reps interact with further down the funnel.

2. How did the role of the Demand Gen team change, and where are you mainly focused now?

Liam’s role is specifically designed to support the demand gen approach. However, shifting from a very traditional lead gen model required a period of adjustment before settling into a clearly defined role.

Lead generation is often a quantity over quality approach, favouring speed and volume over relevance and value. Demand gen is quite the opposite, requiring patience and more strategic thinking in order to be successful.

Liam explained, “You have to re-think a lot of the stuff you know and do, the way you use all the channels, and the way you think about content. With lead gen, you’re doing a lot of the same activities, spending a lot of your time on just keeping the system alive. This is things like lead-hand off, determining what’s a valuable lead, lead scoring and so on. But that’s all just to try and grade the intent of someone that has no intent.”

So, when shifting from lead gen to demand gen, Liam highlighted some notable changes in the way he approached certain core aspects of his marketing.

When focusing on demand gen, you no longer have to build endless email nurtures for everyone who’s come in, to try and warm people up, because you now only have a few direct sources of people coming into your CRM.

Instead, you can have very specific nurtures for different stages, and you can really whittle down what you’re doing there. So, you rely less on email marketing because your email now works as a pure inbound function to support people who are coming into the funnel. Less outbound email is needed, which I think everyone on the receiving end is definitely grateful for.

With lead gen, the content you create is mostly stuff that can capture a lead. You can’t do much video content, even though it’s often the most engaging, because you can’t get any leads from it. No one completes a contact form to watch a video.

So, with lead gen, you end up creating a lot of e-books, you do a lot of webinars, and you gate them. But with that, you’re not actually interested in the quality of the content you’re writing so much. You’re more interested in finding the right topic that will generate enough leads.

You’re not trying to really engage your audience.

When you shift to demand gen, you’ll become more focused on content that you’d actually like to consume. It’s all about making things fun and engaging. That’s through video, quizzes, games, then written pieces as well. You’ll also need to focus more on what makes people comment and share on social media, and actually gets people engaging with you and your brand.

With the above shift in content creation, your paid social media activity changes too because you’re no longer just running a static image ad with a contact form on it.

With lead gen, your paid advertising will be optimised for bringing in customer leads. As a result, you’re just trying to find the cheapest way to secure leads, and that’s how you measure success.

When shifting to demand gen, your content is far more customer-centric, so you have to think about how people are consuming those ads. You’re no longer trying to capture people’s information then and there, so you can make the ad completely consumable in the social media feed, so the audience doesn’t need to click on to your website.

They get all the information from it on their feed. It’s also pushing your brand out, so as people scroll through they see you and they know who you are. Having great engaging content is what should make your brand memorable and intriguing from there.

Liam added, “Demand gen just changes the whole perspective of what you’re doing. It makes it more complicated, and harder to do, but a lot more interesting than just collecting email addresses.”

3. What results has Cognism seen since the shift in focus to demand generation?

As mentioned earlier, a demand gen strategy requires more patience than lead gen, as it will take some time adjusting and waiting for improved performance to really take shape.

Despite the positive results at Cognism now speaking for themselves, Liam warned that you should prepare to see your performance temporarily decrease when you first remove the lead capture element from your marketing activities.

Liam said, “Your MQLs will fall through the floor as soon as you stop lead generation. You’re only bringing in people who are putting their hands up and coming to you. For example, we went from generating two and half to 3,000 MQLs per month to maybe 400.”

“You’ll start to see that your sales cycle should, if you’re educating your market properly, drop as well. This means no more leads where it’s the first time they’ve heard about Cognism when they’ve spoken to the sales-person. It’s now that they’ve all heard about you before, so when they submit a demo request they’re ready and willing to move through the process quicker.”

“Once the demand generation engine has been running for long enough, you’ll then begin to see your conversion rate also increasing. Instead of that 0.2% conversion rate mentioned earlier, we sit at 25% for an inbound demo request. And the better you educate your market, the better that conversion rate will be.”

So, demand generation is all about optimising your marketing and sales funnel to clear out the dead-weight that lead gen tends to bring in. By doing that, you’ll provide your sales team with a far more relevant pipeline of inbound enquiries with intention to buy.

Eventually, if your content is a high level of quality and your marketing reaches the right audience, you may even see your pipeline increase as well.

Liam added, “When we moved to demand gen, we’d grown the inbound demand from two to six million in pipeline. That’s everyone who’s just come in direct to us. We’ve continued to see that pipeline grow, and it’s now at about 13 million, so it’s grown again recently. That’s all just people coming straight into us. So, you see that trend increase.”

A few other highlights to look out for in this episode: 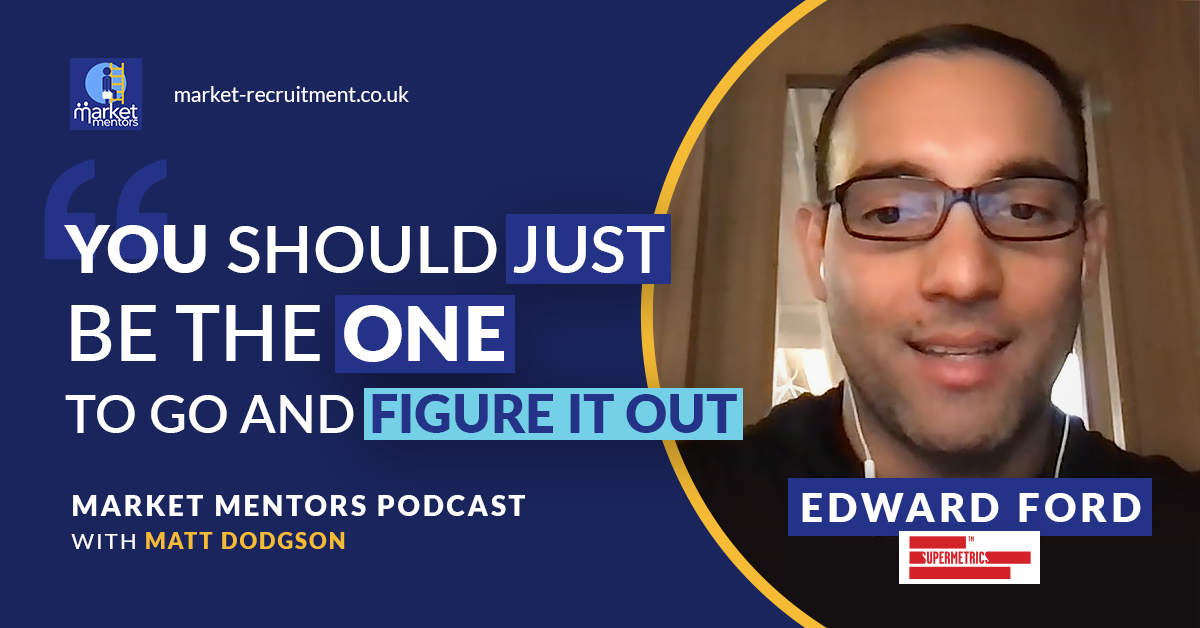 Introduction With such fierce competition in virtually every category today, being a B2B tech marketer is more challenging now than ever before. With that in mind, it can often be useful to look at the companies leading the way for… 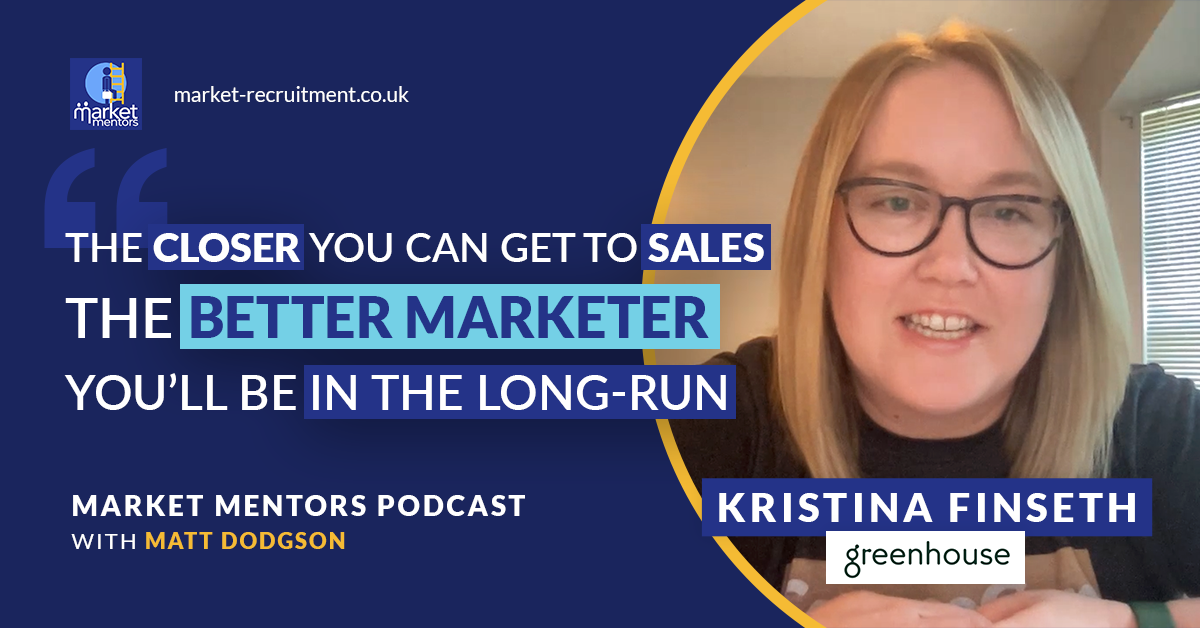 Dec 21, 2021
Expert Advice to Increase the Success Rates of Your Cold Outreach

Introduction It seems today that a lot of marketers are far more focused on inbound marketing than outbound, and prefer not to put much effort into cold outreach anymore. But this week’s guest is a firm believer that, with the… 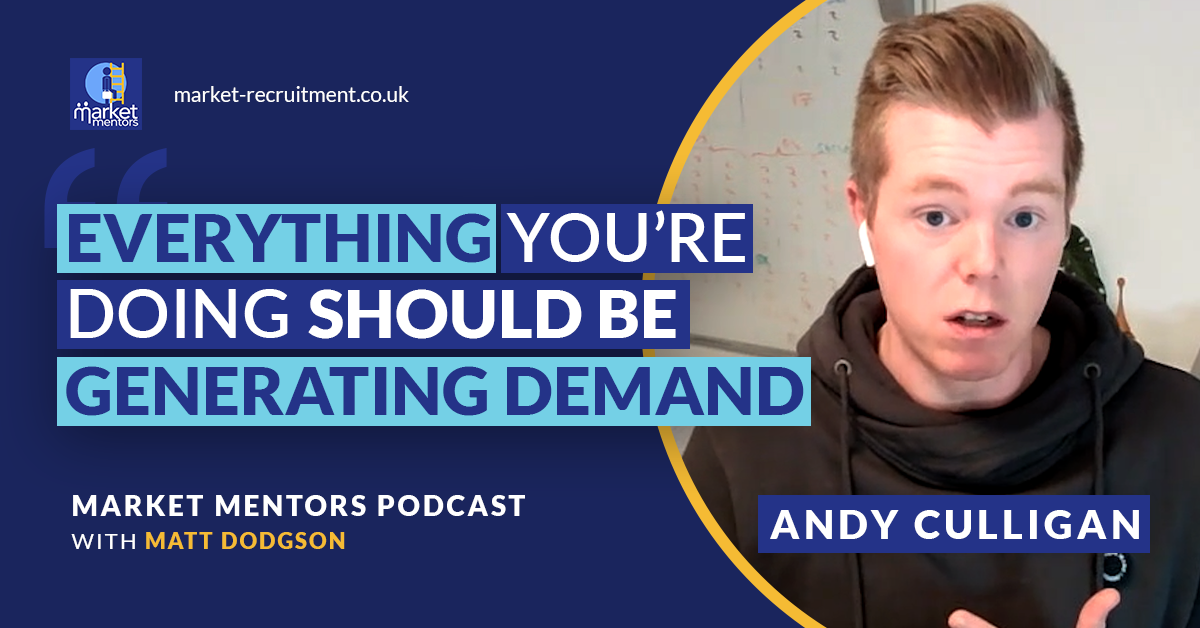 Introduction Demand generation is a popular trend in modern marketing because of the way it supports sales teams and enables them to be more successful. But many businesses overlook the fundamentals of good demand generation, and consequently run into challenges or…